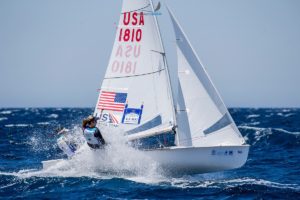 Miami, FL (June 26, 2019). The long road to the Olympics is paved with several shorter sections. The U.S. Coast Guard’s LTJG Nikole Barnes and Lara Dallman-Weiss, Team Perfect Vision Sailing’s campaign to represent the U.S.A. in the Women’s 470 at the 2020 Summer Olympics in Japan, successfully completed one of these in June: Europe’s spring circuit of elite regattas. In the first of these events, the Trofeo Princesa Sofia Iberostar regatta, held April 1-6, in Palma de Mallorca, Spain, LTJG Barnes and Dallman-Weiss placed 15, 16 and 25 scoreboard positions higher, respectively, than the three other U.S.A. Women’s 470 teams, to qualify for the Olympic Test Event, on August 17-22, 2019, in Enoshima Yacht Harbour, Japan. Then, with this golden carrot firmly fixed in Japan, both in 2019 and ultimately in 2020, the sailor’s spent the remainder of the European spring circuit and afterwards in training with top teams laser-focused on what they needed to excel in the ‘Land of the Rising Sun’ later this summer.

“It was a key step in our campaign to go to Europe for these regattas before traveling to Japan, so that we could get on a starting line with some of the world’s best Women’s 470 sailors,” explains helmsman LTJG Barnes. “If we just stayed at home and trained by ourselves, sure we would have improved, but it would have given us a false sense of our ability. In the intense racing environment of Europe’s spring circuit you can fail fast, but if you are willing to stand up after getting knocked down you will learn so much faster. We weren’t comfortable with watching boats sail in front of us. That’s why at our last event in Marseille, France, we were top 10 at almost every first windward mark in conditions from 5-30 knots. That means that we have great starts and are fast in a wide range of conditions. Our failing fast moments were the down winds where we weren’t able to keep the mast upright when we were sending the boat too hard. We were fast, until we flipped.” 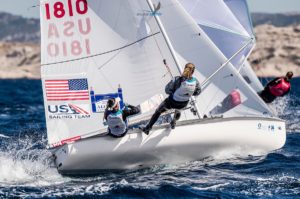 After the Trofeo Princesa Sofia Iberostar regatta, LTJG Barnes and Dallman-Weiss competed in the World Cup Series – Genoa, April 15-21, in Genoa, Italy; the 470 Open European Championships, May 6-14, in Sen Remo, Italy; and the World Cup Final Marseille, June 2-9, in Marseille, France. Each of these were important to test various aspects of the team’s training in different racing situations. For example, winds were very light and unpredictable in Genoa versus the strong breeze in San Remo and Marseille. Overall, although LTJG Barnes and Dallman-Weiss’ results don’t necessarily reflect this, improvements were tremendous and on par with the goal of peaking at the 470 World Championships (August 2-9), as this is an opportunity for the team to quality the U.S.A. in the Women’s 470 for the 2020 Summer Olympic Games. The other major regatta this summer in Japan, in addition to the Olympic Test Event, is the 2020 World Cup Series 1, set for August 25-September 1. 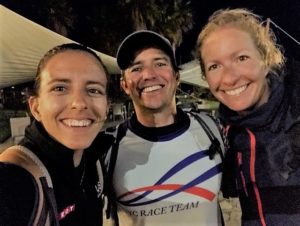 In less than one month, LTJG Barnes and Dallman-Weiss will arrive in Japan. With various fleet sizes and competitors competing at each of the three major events, the sailors will have a different specific priority at each one. Ultimately, this summer’s goals are to qualify the USA in the Women’s 470 for the 2020 Olympics and for LTJG Barnes and Dallman-Weiss to qualify for the U.S. Olympic Sailing Team.

“One point that has been clear throughout our time in Europe is that it takes time to reach our potential,” says crew Dallman-Weiss. “With each event and the tremendous help of Robby (Bisi, coach), we’re beginning to understand the 470 in ways we haven’t before. Some of the tools we have added include rig tune, precise communication, specific kinetics, and an overall understanding of weather.”

Bisi, both an Olympic sailor and coach of several Olympians, also served as LTJG Barnes coach in 2011 prior to Barnes and then-crew Agustina Barbuto earning a bronze medal at the ISAF Youth World Championships in the 420, in Zadar, Croatia. 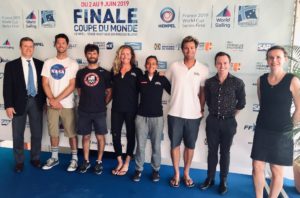 An Olympic medal comes down to on-the-water performance in the penultimate regatta. An Olympic campaign is so much more. For example, it’s about international representation and giving back. In Marseille, which is the 2024 Olympic sailing venue, LTJG Barnes and Dallman-Weiss met Simon Hankinson, the U.S. consul general. They learned about Hankinson’s duties and shared their Olympic campaign goals with him. In San Remo, the two sailors took part in a 470 Class beach cleanup.

For LTJG Barnes, an Olympic campaign both strengthens and continues to build a unique skill set that will serve her well in her continued career as a U.S. Coast Guard officer.

“When I’m on the water I think back to my Coast Guard training: the quick thinking, attention to detail, ability to make mistakes and learn quickly from them, and the work ethic to do whatever it takes to get the job done. We are constantly juggling the logistics and strategy and managing budgets and equipment at one event while also pre-planning for events that are months in advance. At the end of the day, most important is the relationships in the boat. As the helm, it’s my job to steer the boat and when in the situation to lead, to do so in a way that allows for the best performance. I have a lot of power in the boat, but I wouldn’t go anywhere without Lara’s skill and feel in the front of the boat. It takes a team and my Coast Guard training has taught me the skills of working in a team environment,” says LTJG Barnes. 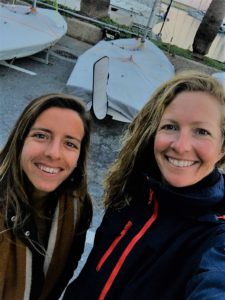 “Consistent with the mission of the Alumni Association, we are thrilled to support Nikki and her teammate Lara in their quest for Olympic gold!,” says Capt. Andrea Marcille, USCG (Ret), president, USCGA Alumni Association. “Becoming the first-ever active duty Coast Guard officer, man or woman, to compete in the Games would be a fantastic story that would help elevate the national prominence of the Academy. Thanks to the enthusiastic generosity of individual alumni, classes, and friends we are off to a great start raising approximately 30 percent of the team’s anticipated need.”